Sofia2 new release 2.16.0 is now available, this release has also been deployed in the experimentation platform SOFIA2 CloudLab.

This new version adds the following features to the platform:

In this update some rendering problems in certain browsers have been fixed, development documentation has been organized and information on deployment models is provided. 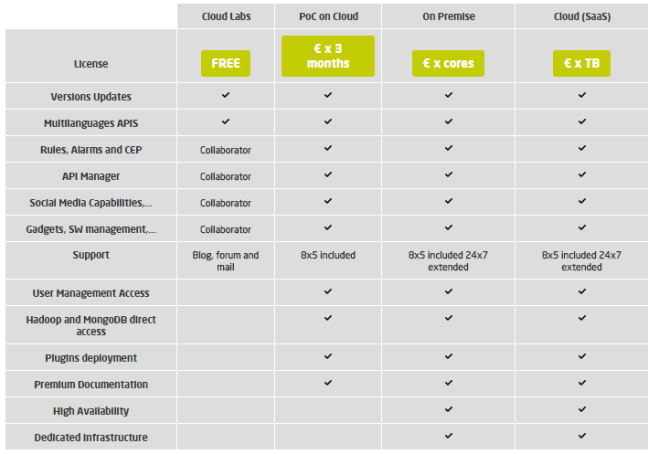 This is an example of a control panel for a fashion company with many stores spread throughout Europe that provides added information for all stores.

From here you can navigate to each store and display interesting real time information as people in queue, most visited areas, most purchased clothes,…

This dashboard is built with the Javascript API from Sofia2 Platform consuming the information that is being inserted in the RTDB.

So far the Sofia2 CloudLab version was only available in Azure. Google Cloud Engine incorporation as Cloud provider allows to balance the load between the two providers according to necessity or availability.

A dedicated support line has been set up to centralize the reception of requests, queries and incidents. To contact the support center just write an email to the Generic user Sofia2 Platform Support supportsofia2 in which you include report contact details, type of request and a description of the queries/incidents.

This functionality allows you to connect Sofia2 to an existing MongoDB instance and visually “convert” a collection in a Sofia2 ontology.

This allows to make available the access to a existente database with the Sofia2 interfaces, in addition to features such as safe access to this collection, validate the inserted information, apply rules on the insertion, …

· Support for MongoDB as Sofia2 Historical Data Base:

The reference implementation of the HDB (Historical Data Base) of Sofia2 is made within the Hadoop HDFS + HIVE + Impala platform.

This version includes the support for MongoDB as HDB as a separate instance from the RTDB and configured to store large volumes of information.

A new SDK for Linux has been created with updated versions of software (including Eclipse Luna) and new commands:

· New Functionalities in generating ontologies from CSV and Excels

There are processing improvements to support the generation of ontologies from files of large sizes (> 1 GB) and millions of records.

The functionality to choose a file Excel / CSV hosted on server remotely has also been added,

Another improvement is the ability to add records loaded from an Excel / CSV to an existing ontology, allowing periodic loads on the same entity.

Thinking about loading large files we have included a new screen that lets you check the charge status of the files:

There have been performed additional optimizations in this Java infrastructure for development of managed KPs (centralized configuration, SW updates, …) in terms of memory consumption (stable consumption less than 30 MB) and update management.

The Hadoop distribution that support the HDB in a CloudLab instance has been updated to the last stable version of Cloudera, CDH5.