This release includes several features, such as:

Each one of them is meant to fit concrete needs:

IoT Edition is designed for high data volume systems that need to analyze and publish information with ease. This version is available in the CloudLab environment for users with COLLABORATOR role. 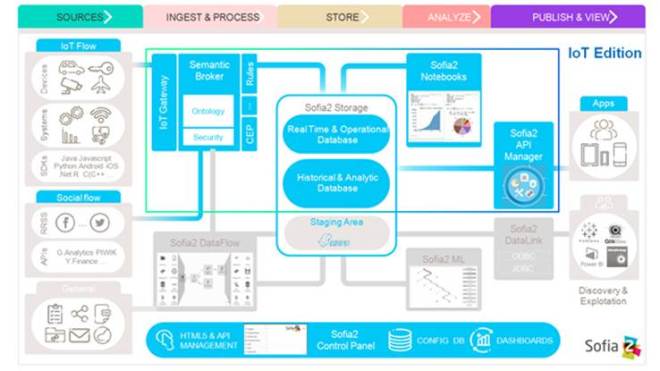 Advanced Analytics Edition
adds real time processing and analytics over BigData. This version is only available for premium users in the Sofia2 Cloudlab.

This version switches from
Spring XD
to StreamSets
to make the reference implementation of the module.

The module allows to run processes in PREVIEW mode to visualize data flowing through each module:

Custom components have been developed such as Excel data processing (with custom mappings), and Sofia2 Origin and Destination modules.

Sofia2 integrates with BigBox, Indra’s bigdata solution for telecommunications market. BigBox meets the new analytical requirements such as handling of enormous volumes of information and inclusion of unstructured data. In this new integration Sofia2 provides features such as real-time processing, visualization and integration of external data sources, RRSS, analytical capabilities …

This functionality allows configure and Schedule URLs and APIs (both internal and external) and define how this results mapped to Ontologies.

This way Sofia2 is able to act as a aggregator and normalizing all types of APIs platform, in turn publishing that information collected as standardized APIs from the API Manager.

The functionality allows users to create groups CONTRIBUTOR Role APIs that can be activated and plan together. 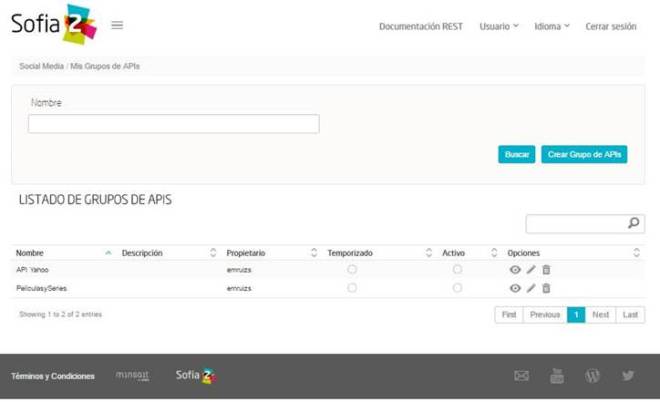 Once created a group of APIS I can asign APIs to the group. The APIs can be of type URL or API Manager:

For invocations to the API Manager I will select the API to use, then appears the parameters of this API and I´lI do with the ontology mapping:

Once I have planned the invocation to the URL or API and the data is loaded in one ontology I can publish this information in the API Manager ,completing the cycle of normalization and publication.

Associated with this functionality Yahoo Finance and Yahoo Weather APIs have been created in the Manager API to invoke easily (it is only necessary to report parameters).

A new set of tools have been added in order to simplify the bigdata infrastructure management. These tools will be available for users with ANALYTICS role.

Any user with analytics role will be able to upload files to his personal staging area in Sofia2. This area is implemented by default in HDFS. Files uploaded from this tool will be available to to be operated from DataFlow and Notebook modules.

This functionality allows to upload different file types, including compressed files (.zip & tar.gz) that will be automatically extracted once uploaded. Multiple file uploading is also available.

Once files are uploaded the HDFS path will be shown:

Apache Hive is a data warehouse infrastructure built on top of Hadoop for providing data summarization, query, and analysis. Nowadays it’s been assumed as standard in storaging, SQL querying, and analysis.

Once mappings are defined the HIVE table creation script is generated to be executed:

This feature allows to create an Ontology from a Hive table, allowing user to define all attributes (name, config, schema, …).

Once data is converted to ontology all platform features would be available: querying, analytics, dashboards, APIs

This release has been included a basic monitoring functionality which is going to complete in upcoming releases.

This functionality allows to the Platform Administrator to monitor different areas like, for example, the ontology size or the ontologies not migrated to the Historical Data Base:

The module indicates in a visual form the anomaled values:

This release has been included a basic monitoring functionality which is going to complete in upcoming releases.

This functionality allows to the Platform Administrator to monitor different areas like, for example, the ontology size or the ontologies not migrated to the Historical Data Base:

The module indicates in a visual form the anomaled values:

This functionality allows to do a complete management of the index on the DB in real time, without knowing the command for creating the index.

The Platform allows the owner of the ontology to create simple and compounds indexes on the ontology: 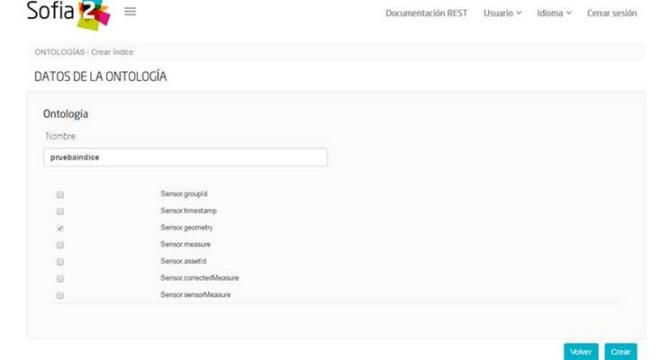 In the CloudLab environment it has limited the number of indexes that can be created by ontology.

With the aim of enabling Sofia2 Web Projects deployed on the platform to use users and roles of the platform, it has been enabled a RESTFul service that allows external systems login and authorizing on the platform

This mechanism can also be used from external systems acting in that case as a simple SSO.

In addition to the RESTful service a Javascript API has been created, this API automates the call to these services exposing 3 operations:

In a next post we will explain this functionality with an example.

In the scope of this release new demos have been created:

A TEST button is added to the Script Editor, it runs the script and displays traces generated by the script.

· Various improvements in stability, performance and usability of the Platform